May 10, 2011 / PRNewswire via COMTEX/ -- today announced the creation of an innovative new public health initiative designed to combat the stigma of asthma among American children ages 0-18. With Coal Cares™ (www.coalcares.org), will offer free, custom-branded inhaler actuators to children living within 200 miles of a coal plant, along with coupons worth $10 towards the purchase of the asthma medication itself.

"Too many young Americans face daily schoolyard taunting and bullying because of a condition over which they have no control," said the Chairman and Chief Executive Officer of . "By re-branding the inhaler as a cool, individualized, must-have accessory, Coal Cares™ will empower children to tell bullies: 'suck it up.'" Children can choose from a variety of youth-themed inhaler cases, from tween faves like "the Bieber" and "My Little Pony," to the "Emo" and "Diamond" inhalers for older, style-conscious youth. There's even "My First Inhaler," for tots.

Coal Cares™ launches today in commemoration of Asthma Awareness Month, the Environmental Protection Agency's effort to call attention to rising asthma rates, especially among children. Coal Cares™ and its Puff-Puff™ line of inhalers is the first, and most ambitious, market-friendly public health initiative of this scope of any privately-owned American company, and testifies to the energy industry's commitment to the well-being of all citizens, including the youngest.

"Our actions are guided by a singular mission: to be a leading worldwide producer and supplier of balanced energy solutions, which power economic prosperity and well-being," said the CEO. "Coal Cares™ brings this mission to life, empowering children everywhere to take control of their destinies, beginning with their own lungs."

Coal Cares™ is emblematic of the return to self-reliance that healthy entrepreneurship demands. "Demanding the implementation of costly 'scrubbing' technology for coal power plants is an untested and heavy-handed intrusion—and a drag on our still-vulnerable economy," said James Miasmus, Vice President of Government Affairs at . "With Coal Cares™, we're thinking globally but acting locally, giving consumers a way to combat some of the problems associated with modern life without crippling industry in the process. We're locating preventive action at the point of consumption, where it belongs."

"Coal Cares™ isn't just the name of a campaign, it's a philosophy, a way of doing business in harmony with the community we are a part of," said Kevin Briesslau, Vice President of Communications at . "Coal is the fastest-growing fuel in the world and has been for the last decade. We're part of America's heritage, and we're here to stay."

is one of America's proudest coal companies, and contributes to making coal U.S.'s largest source of energy by far.

We at know America cares about coal. After all, coal is the fastest-growing fuel in the world, and provides the U.S. with half of its energy needs. That's been good for business!

Today, is giving back. To prove that Coal Cares™, will do nothing less than nip in the bud the most devastating effect of asthma on children: the social stigma and bullying too often associated with the use of inhalers. 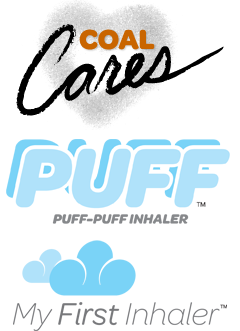 The Coal Cares™ Puff-Puff™ line of free novelty-themed inhalers—from "My First Inhaler," to "Twilight," to "the Bieber" and beyond—will transform the inhaler into a cool, fun, stylish accessory for asthmatic children of any age. Thanks to , pulmonarily-challenged youngsters will now be able to tell uncaring bullies to "suck it."